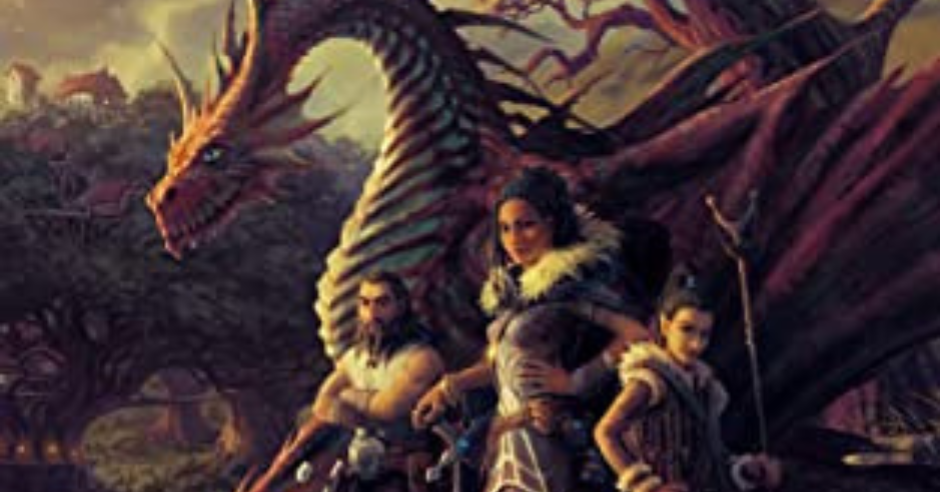 “I’ve always been a story teller, even before I could read.”

I’m so excited to have another opportunity to chat with Margaret Weis, the undisputed queen of Dragonlance (sorry, Takhisis) and co-author of The Dragonlance Chronicles, the trilogy that started it all.

Thank you for joining me again!

(JC) Dragons of Deceit, book one in the long-awaited Dragonlance Destinies trilogy, releases August 2nd. Will you tell the readers a little bit about it?

The best I can do is the jacket copy. (Which I helped write!)

Destina Rosethorn—as her name implies—believes herself to be a favored child of destiny. But when her father dies in the War of the Lance, she watches her carefully constructed world come crashing down. She loses not only her beloved father but also the legacy he has left her: the family lands and castle. To save her father, she hatches a bold plan—to go back in time and prevent his death.

First, she has to secure the Device of Time Journeying, last known to be in the possession of the spirited kender Tasslehoff Burrfoot. But to change time, she’ll need another magical artifact—the most powerful and dangerous artifact ever created. Destina’s quest takes her from the dwarven kingdom of Thorbardin to the town of Solace and beyond, setting in motion a chain of disastrous events that threaten to divert the course of the River of Time, alter the past, and forever change the future.

(JC) How does it feel to be back in Krynn?

Always fun to go back to Krynn!

(JC) Do you have a favorite location in Krynn and, if so, what is it? Are you ever tempted to set important scenes or write things in such a way that time is spent at that location?

No, not really. Although Mt Nevermind comes close.:)

(JC) Tasslehoff Burrfoot has to be the most well-traveled of all kender! He has found himself involved in many big events in several different time periods. What makes him ideally suited to being the common thread that ties so many of these events and time shifts together?

I have long said that Tasslehoff is the wisest person in the stories. He sees the truth in people, even if they can’t see it themselves. He accepts them for what they are. He is content to be who he is. He is loyal to his friends. He is always open to new adventures. He is filled with curiosity.

(JC) Tas has such an incorrigible and fun-loving personality that it’s easy to overlook the wisdom he has and the incredible ways his interactions with other characters affect them. I always saw him as a catalyst for character growth in others. Will he have any such interactions with Destina Rosethorn, the main character in Dragons of Deceit, and how will these interactions affect her or others?

I really can’t say any more about the plot! Sorry.

(JC) I’m really excited to meet a new group of characters in Dragons of Deceit (while also happily looking forward to seeing some old friends again). Which new character was your favorite to write and why?

My favorite new character to write doesn’t appear until the second book, so I really can’t talk about it!

(JC) I can’t pass up the chance to ask about my favorite morally gray character, Raistlin. You’ve said in the past that you really understand Raistlin and it’s clear he holds a special place in your heart. When thinking of Raistlin, do you picture him more often as wearing red robes or black? And why?

I will always think of Raistlin as wearing the red robes. I think that is who he is at heart. He gave into temptation to try to gain power, but, in the end, he realized that it would end up destroying the world, as it had destroyed him. That was his tragedy.

(JC) You and Tracy have been collaborators on so many amazing books, including Dragonlance, of course, the Death Gate Cycle, and The Dark Sword trilogy. How has this creative team-up developed over the years? What are some of the triumphs and challenges of co-creating?

Tracy and I met at TSR. He was the game designer in charge of DL and I was the liaison with the game design team and the book department. We both realized that we had a great story to tell with DL and wanted to write it ourselves. We both came up with the plot. I was the main writer because Tracy was working the game side. I would send what I’d written to him and he’d add his parts of the tale. We have worked that way ever since! The key to a partnership is respect.

(JC) Dragonlance spent some time in the hands of other people. Is it tough to adapt to the changes that were made during that time? How do you go about returning Dragonlance to the way you envisioned it?

We rely on primary source material. It would be impossible to reconcile all the different visions of all the authors who ever wrote for Dragonlance!

(JC) When did you first realize you wanted to be a writer?

I’ve always been a story teller, even before I could read. I would tell stories to the kids in kindergarten during rest time. Writing was a natural extension of that. I didn’t really know I wanted to be a writer until I was in college. I was in my Freshman English class when the teacher took me aside and told me that if I wasn’t majoring in Creative Writing, I should be. It was like the moment in the Blues Brothers when the heavens open up and Jake realizes he has to put the band back together. I realized I was a writer. I switched my major that very day.

(JC) Hooray for that teacher!!!

The internet today is an entirely new beast. How has technology changed your writing and publishing process over the years?

I use a computer instead of a manual typewriter, which is all that was available when I started out. That was a huge change.:)

(JC) The last time I was privileged to interview you, I asked about authors that you love or that you have been influenced by. I think it’s interesting that none of the names you listed (including Dumas, Rex Stout, and Jane Austen, among others) write fantasy. Do you think reading books in multiple genres changes how you write fantasy?

Absolutely! I tell aspiring fantasy writers to read everything EXCEPT fantasy. Fantasy worlds are grounded in reality so that the reader will accept them. Learn about character creation and plot development and writing techniques from other genres. Your work will be richer for it.

(JC) If you could sit down and have dinner with any author or character, who would you choose and why?

I’d love to have tea with Jane Austen.:)