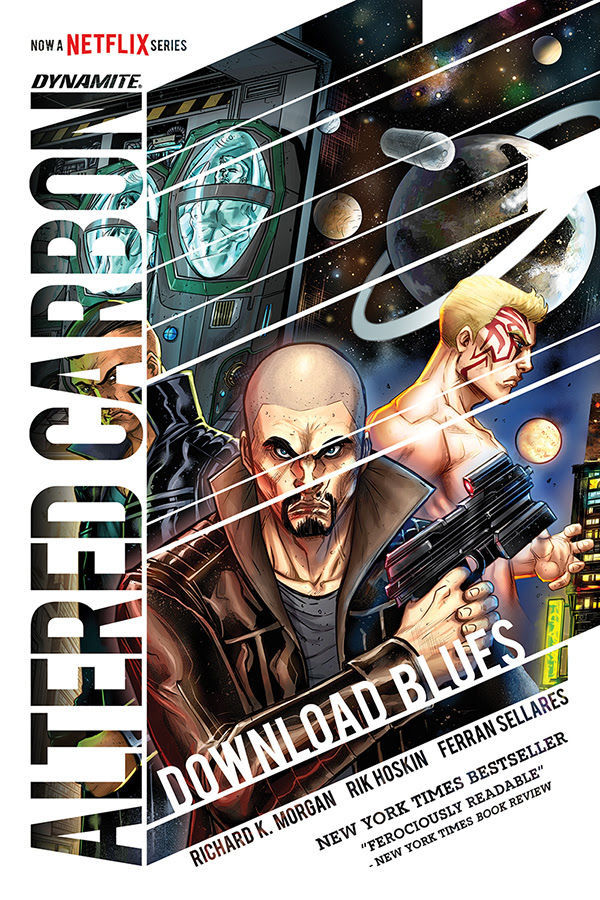 “Culture is like a smog. To live
within it, you must breathe some of it in and, inevitably, be
contaminated.”
― Richard K. Morgan, Altered Carbon

In the distant future, the human body is a temporary and interchangeable commodity – if you can pay.

For the interstellar elite, bodies are swapped out and reused without a second thought. You never grow old; you never die.

However, some bodies are more temporary than others …

Takeshi Kovacs was once a member of the Envoy Corps, stormtroopers for the Interstellar Earth Protectorate, ultra-lethal adepts in switching bodies across the stars. While he served, he was known by a variety of names–Mamba Lev, One Hand Rending, the Icepick–all testament to his capacity for rapid response and extreme violence in whatever flesh he wore. Now he’s out of the service and trying to live a different life. But the Protectorate hasn’t changed its spots, no matter what world Kovacs drifts to, and with that old combat rage still burning deep inside him, will he ever really be able to walk away?

“Culture is like a smog. To live
within it, you must breathe some of it in and, inevitably, be
contaminated.”
― Richard K. Morgan, Altered Carbon

I have been a fan of the Takeshi Kovacs universe since Morgan wrote the original Altered Carbon in 2002. Not only that, I find the “Land Fit For Heroes’ world to be some of the best fantasy written in the last twenty years.

All that being said, I found this to be a mediocre adaptation of the source material. The fundamental problem is that the artwork did not flow well with the dialog, that in turn led to stunted panels. I don’t think this is either Morgan or Hoskin’s fault. Hoskin is an excellent artist. Check out his work in The Red Rising adaptation. I thought the art was very well done there. But for some reason, Altered Carbon and his style did not mesh well. Hoskin’s artwork is too angular and stocky to fit Kovacs predator personality. it came off as more He-Man then I would have liked. I will continue to read this universe because Morgan’s writing is always top-notch. But I won’t seek it out like I usually would have.

Thank you to Netgalley and Dynamite Entertainment for providing me with a copy of this in exchange for my open and honest review.

Review – A.D.: New Orleans After the Deluge by Josh Neufeld