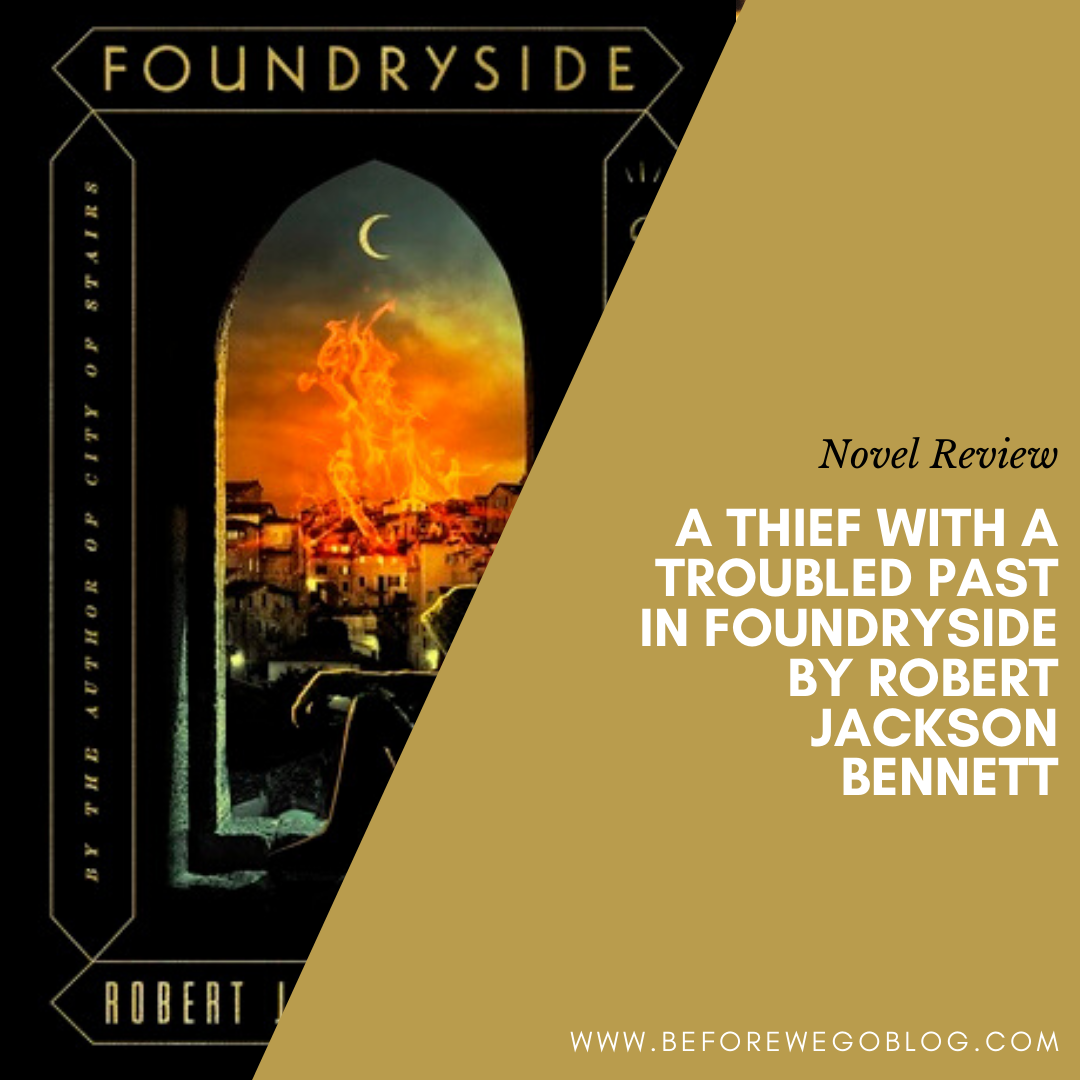 By Beth TablerJuly 20, 2020No Comments
Review

"I did what was necessary to gain my freedom. Wouldn’t you?"

Humanity seems most eager to use this latter currency. And we never note how much of it we’re spending, unless it happens to be our own.―

Sancia Grado is a thief, and a damn good one. And her latest target, a heavily guarded warehouse on Tevanne’s docks, is nothing her unique abilities can’t handle.

But unbeknownst to her, Sancia’s been sent to steal an artifact of unimaginable power, an object that could revolutionize the magical technology known as scriving. The Merchant Houses who control this magic–the art of using coded commands to imbue everyday objects with sentience–have already used it to transform Tevanne into a vast, remorseless capitalist machine. But if they can unlock the artifact’s secrets, they will rewrite the world itself to suit their aims.

Now someone in those Houses wants Sancia dead, and the artifact for themselves. And in the city of Tevanne, there’s nobody with the power to stop them.

To have a chance at surviving—and at stopping the deadly transformation that’s under way—Sancia will have to marshal unlikely allies, learn to harness the artifact’s power for herself, and undergo her own transformation, one that will turn her into something she could never have imagined.

Foundryside by Robert Jackson Bennett is a story that blurs the lines between science fiction and fantasy in his steampunkesque fantasy novel.

When people think of fantasy as a genre, often, they think of high fantasy. The genre pioneered by our lord and savior, J.R.R Tolkien. But now, 60 years later, since Lord of the Rings, fantasy is a much broader and more complicated genre. Writers, instead of being pigeonholed in a particular style, now take their ideas to new levels by branching out and combining types. What was once thought of as a non-marketable story in the fantasy genre is now just another Tuesday, and we are better for it as readers.

“All things have a value. Sometimes the value is paid in coin. Other times, it is paid in time and sweat. And finally, sometimes it is paid in blood.
Humanity seems most eager to use this latter currency. And we never note how much of it we’re spending, unless it happens to be our own.”
― Robert Jackson Bennett, Foundryside

Foundryside is the first book of a new trilogy by author Robert Jackson Bennett, whose previous works include The Divine Cities trilogy. Reading Bennett’s stories, you get the overall feeling that the human condition and how that condition reflects on other citizens are at the forefront of his mind in his stories. Robert has taken a keen love of fantasy and an understanding of the genre and mixed it with a social conscience. Often in his writing, he asks tough philosophical questions such as: what is humanity? What is true freedom? Or, what are social classes? In Foundryside, Bennett creates a world defined by steampunkesque creations that are given life and magic by the ancient scribed sigils scrawled upon them. Sigils that can make up be down, wood believe itself to be stone, entirely changing physics and the laws of nature. With this kind of power comes inherent problems. Most of those problems come in the form of a monopoly on scrived material between ruling houses. These houses, much like gang organizations, have power over the city and its people. The poor people that work for and around them can barely feed themselves.

A struck match sounds like a kiss in the dark, sometimes.―

“Every innovation—technological, sociological, or otherwise—begins as a crusade, organizes itself into a practical business, and then, over time, degrades into common exploitation.”
― Robert Jackson Bennett, Foundryside

Enter Sancia: protagonist, a thief who has a troubled past. She fights to eat and live like all the other poor people of the city Tevanne. Sancia takes a job to steal something incredibly valuable. The trick is, don’t look in the case.

Sancia looks in the case. Now everyone wants to kill her. Looking in the case might have been the best or worst idea she ever had. Whichever, the choice to peer inside has enormous and far-reaching effects for Sancia as a protagonist, people are dying around her, the city is quaking on its posts, and the houses have turned their steely scrived visage on this lowly thief. There are consequences for her friends and allies, and for the city of Tevanne itself. The politics shift in this story at a breakneck pace, and you never know who the good guys are. But you know one thing, you want Sancia, the underdog to win.

“I did what was necessary to gain my freedom. Wouldn’t you?”
― Robert Jackson Bennett, Foundryside

Foundryside is a fantastic all-around novel. Complete enough to be read as a stand-alone, but as a part a trilogy, I feel that the world that Bennett has built will continue to get fuller and more interesting. The second novel Shorefall released this last month, and if ratings and reviews are indicators, Shorefall is as good or better than its predecessor Foundryside, which is a tall order.

I know I am looking forward to diving into the second book as soon as possible. The world of Tevanne is a world I want to immerse my self in again and again.

I bought a copy of this for my personal library.

Robert Jackson Bennett is a two-time award winner of the Shirley Jackson Award for Best Novel, an Edgar Award winner for Best Paperback Original, and is also the 2010 recipient of the Sydney J Bounds Award for Best Newcomer, and a Philip K Dick Award Citation of Excellence. City of Stairs was shortlisted for the Locus Award and the World Fantasy Award. City of Blades was a finalist for the 2015 World Fantasy, Locus, and British Fantasy Awards. His eighth novel, FOUNDRYSIDE, will be available in the US on 8/21 of 2018 and the UK on 8/23.