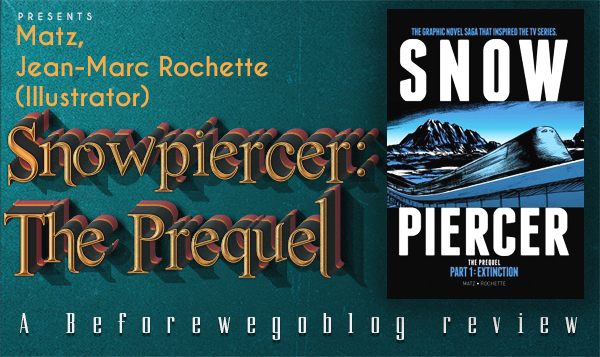 A Review of Snowpiercer – The Prequel: Extinction by Matz, Jean-Marc Rochette

A Prequel to the Famous Snowpiercer Series

The prequel story to the Snowpiercer graphic novel series.

The Snowpiercer saga continues with this brand new story by original artist Jean-Marc Rochette and Eisner nominated writer, Matz. Set before the extinction event that caused the new ice age in which the Snowpiercer travels perpetually around the globe, witness the terrifying events that led to the need for and creation of the eponymous train.

I very much enjoyed the Snowpiercer movie, and thus when I saw at the library there was a three-part series of graphic novels to go along with the brilliant film, I was stoked. If you aren’t familiar with the film, it is about a future society that travels around on a train. The rest of the world is a snowy wasteland, but the last remnants of the world are divided by class on this gigantic train. We don’t know why the train is the only viable escape route for humanity, but it just is. Snowpiercer is a story that requires a lot of suspension of disbelief.

Writing in this story is both its strength and a weakness. The writing is tight and exciting. The dialog is concise and engaging; the problem is that it is so heavy-handed and overwrought. I found myself confused and shaking my head. There is such a thing as subtlty in writing, not every idea needs to be pounded into the reader’s head like a nail into a piece of wood. This story doesn’t quite get that.

Art-wise, it is done beautifully. But you have to like this type of artwork. The shading is quite stark and dramatic, which, on the one hand, adds to the drama of the story. But, on the other hand, it could be distracting and again overwrought to the reader.

If you are a fan of the Snowpiercer series, I say check out this book even if it is for a sense of completion. However, I would not go out of my way to read this.

“Matz” is the pseudonym for French writer Alexis Nolent. He has written scripts for video games, a novel, and as Matz, a number of comics including Triggerman by Walter Hill. His graphic novel, Du plombe dan la tete a.k.a. Headshot, was adapted into the 2012 film, Bullet To The Head.