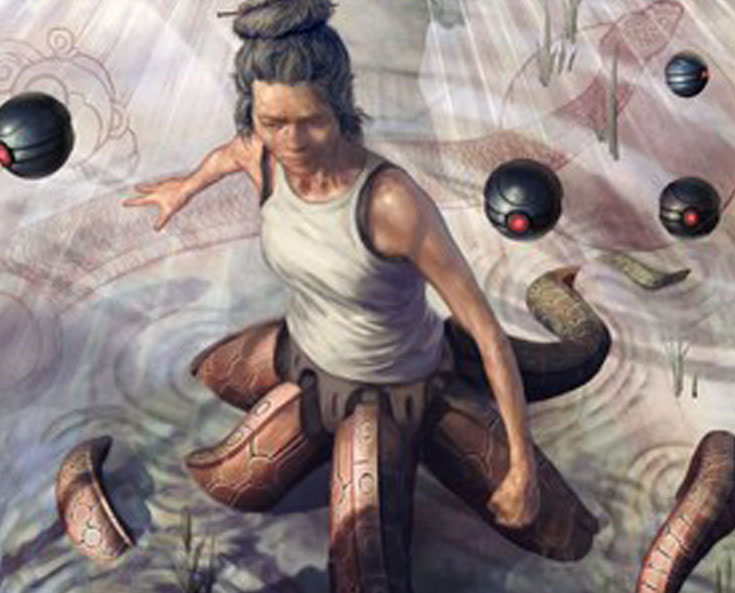 Review – Gods, Monsters, and the Lucky Peach by Kelly Robson

“I want to do important work,” Kiki said, and the light that shone from those clear, bright eyes was too intense. Minh looked away. “That’s all any of us want. To not go to waste,” Kiki said.” – Gods, Monsters, And The Lucky Peach.

Discover a shifting history of adventure as humanity clashes over whether to repair their ruined planet or luxuriate in a less tainted past.

In 2267, Earth has just begun to recover from worldwide ecological disasters. Minh is part of the generation that first moved back up to the surface of the Earth from the underground hells, to reclaim humanity’s ancestral habitat. She’s spent her entire life restoring river ecosystems, but lately the kind of long-term restoration projects Minh works on have been stalled due to the invention of time travel. When she gets the opportunity take a team to 2000 BC to survey the Tigris and Euphrates rivers, she jumps at the chance to uncover the secrets of the shadowy think tank that controls time travel technology.

Gods, Monsters, and the Lucky Peach is not a simple story. There is nothing subtle and simple about a middle-aged scientist with prosthesis octopus-like legs, time travel, ecological restoration, and culture dynamics. Nor is there anything subtle about a world in recovery that has been racked by climate change, species die off, and plague. The world Minh lives in is one that is complicated and nursing its wounds and trying to move on. It sounds like it is a depressing story full of tropes, coming off as a typical apocalyptic novel. But in Gods, Monsters and the Lucky Peach, it isn’t like that. If anything, Robson has created a world that is recovering and in a lot of ways excelling. We are past the struggle for resources usually associated with apocalyptic novels. The descriptions of technology and how it is intertwined with life are marvelous, but humanity has changed past that. To me, there seemed to be an undercurrent of depression among the plague-babies (those that survived the plague), Minh’s generation. This is in stark contrast to Kiki’s generation, the fat-babies. The characterizations between the two cultures is relevant and interesting.

The story is told in three parts. The first, and most lengthy is setting up the world building and Minh’s life as a world-class ecologist. Her job is to go out and do reclamation on natural habitats in an attempt to find balance again with nature. We meet Kiki, an administrator, and fat-baby – tall, healthy, and robust in personality. All she wants is Minh’s approval and friendship. She goes out of her way to put herself in Minh’s life, almost to an uncomfortable degree. Minh is a cantankerous older woman. Set in her ways and uncomfortable with how forthright Kiki is. A new proposal for a time travel project to ancient Mesopotamia has come up, a proposal that Minh wants badly. Kiki and Minh work to land the bid and enlarge her team with the addition of Hamid. He falls in the middle, personality-wise. The second part of the story is the actual expedition and ecological restoration work. It is fascinating how Robson handles this. She creates a stark dichotomy between the technology of the Lucky Peach(their ship) and ancient Mesopotamia. The third part of the story is what happens after the initial part of the cataloging is done, where cultures clash.

Robson has meticulously constructed a story that is rich and nuanced. Areas that are “old-hat” in science fiction, i.e., time travel, seem restrained and exciting instead of worn out. It is a rigorous story that asks a lot of the audience. Character dynamics, the heart of the story, are done in a way that you empathize with all sides involved. It is obvious why Robson won many awards for this story. This story cements her as a science fiction powerhouse and one to watch in the coming years.

Check Out Gods, Monsters, and the Lucky Peach

Review of John Dies at the End by David Wong