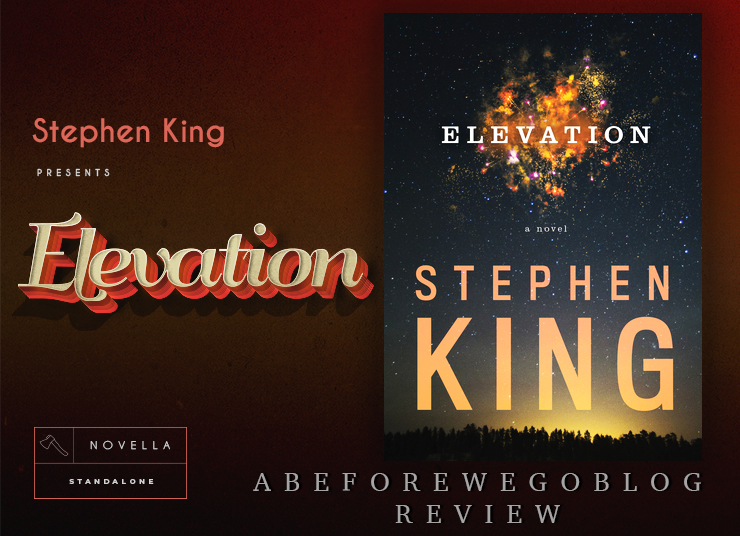 A Review of Elevation by Stephen King – A Purely Mediocre Novel

A Novel About as Exciting as Lukewarm Tea and Stale Toast

Everyone should have this, he thought, and perhaps, at the end, everyone does. Perhaps in their time of dying, everyone rises.―

Although Scott Carey doesn’t look any different, he’s been steadily losing weight. There are a couple of other odd things, too. He weighs the same in his clothes and out of them, no matter how heavy they are. Scott doesn’t want to be poked and prodded. He mostly just wants someone else to know, and he trusts Doctor Bob Ellis.

In the small town of Castle Rock, the setting of many of King’s most iconic stories, Scott is engaged in a low grade—but escalating—battle with the lesbians next door whose dog regularly drops his business on Scott’s lawn. One of the women is friendly; the other, cold as ice. Both are trying to launch a new restaurant, but the people of Castle Rock want no part of a gay married couple, and the place is in trouble. When Scott finally understands the prejudices they face–including his own—he tries to help. Unlikely alliances, the annual foot race, and the mystery of Scott’s affliction bring out the best in people who have indulged the worst in themselves and others.

Elevation is proof that Stephen King can write a mediocre novel.

It isn’t a bad novella; I don’t think Stephen King has ever written anything terrible. But this isn’t his best.

The premise of the story follows character Scott Carey of Castle Rock, Maine. A lot of craziness happens in Castle Rock in the King world. It is the nexus for all evil as far as I am concerned. Scott develops a strange problem, reminiscent of King’s other novel Thinner. Scott keeps losing weight at a pound or more day. The odd part is Scott looks no different mass wise. He isn’t thinner, but he weighs less. Even carry metal chains and fully clothed, he continually is losing weight on the scale.

life is what we make it and acceptance is the key to all our affairs. ―

I ended this story with a full-body shrug and sigh. It was just a middle of the road story, not much exciting happened, then it stopped.

As far as recommending it, I would recommend it as much as lukewarm tea and a slightly burnt piece of plain toast.

Not going to kill you, but all you are going to get out of the experience is some calories.

Pawn’s Gambit is a worthy addition to the Mortal Techniques series and a follow-up to Never Die.

Stitches by David Small “…. When you have no voice, you don’t exist”

Pangea Online – Death and Axes hooks you from the first sentence and carries you through until the thrilling conclusion, with all its reveals.

#musicmonday – Everybody Wants to Rule The World by Lorde

#musicmonday Everybody Wants to Rule the World by Lorde. A perfect song for The Hunger Games.