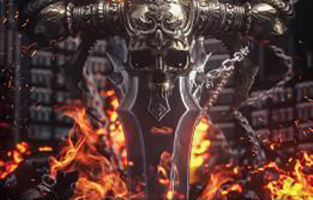 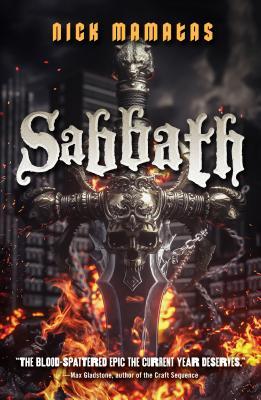 The infamous eleventh-century warrior Hexen Sabbath is plucked from death and certain damnation by a being claiming to be an angel of the Lord, and finds himself dropped into contemporary Manhattan with no clothes, no weapons, no resources, and one mission–to track down and kill the living personifications of the Seven Deadly Sins before they bring about Armageddon.

With time running out and his only ally a destitute art gallery owner, Sabbath must fight his way through New York’s elite and challenge the world’s most powerful man, or an eternity of suffering will be his, and our, only reward.

Sabbath by Nick Mamatas is a death metal band rolled in a taquito.

It is strange, addictive, probably bad for your arteries, and at times makes you want to headbang to some Slayer. These are the mental images I got while reading this story. If Def Leppard could be condensed down to a single book, this would be it.

Sabbath is the novelization of Sabbath: All Your Sins Reborn by Mathew Tomao. The graphic novel currently has a 2.1 on Goodreads, and from what I can tell reviews wise, it is not well-liked. However, the novelization has quite a lot more meat in the story, then the graphic novel does. Hexen Sabbath (see my Def Leppard comment above) is pulled from hell after dying on the battlefields in the 11th century. He has led a prideful and sinful life. He is removed from hell by the angel of judgment for one reason, and one reason alone, he is to kill the embodiment of the seven deadly sins before they destroy mankind. How they go about destroying humanity is not quite fleshed out, know that they are bad news. He also must sever their heads and carry them around in a duffle bag to present them to Abathar (angel of judgment) upon completion of his quest. In exchange for his successful killing of the sins, he will be granted a reprieve from hell and welcomed in heaven. He agrees because, of course, he does.

Hexen finds himself naked and confused in the year 2016. Thankfully his head is full of information on how to navigate the differences between his own time and now. This is an excellent opt-in by the author to minimalize culture clash in a story this fast-paced. He also has a helpful tattoo that lights up whenever sin is close. He meets up with a female Russian gallery owner that he connects with, and she becomes a part of his story.

Once he is clothed and donning a new but old sword, Hexen sets out to kill the seven. The battles are entertaining. Lust is a prostitute. Wrath a cage fighter and had some of the most exciting scenes of the book. Envy is a dilettant who is never quite good enough. It is all very grindhouse type dialog and scenes. Matterafact, this book on a whole reminds me of an old grindhouse movie from the seventies, but with better acting. It is a whole lot of sex, violence, and gore, but not in a way that is not disturbing but more of tongue in cheek kind of way. I mean, Hexen walks around with six heads in a duffle bag. You can’t take this too seriously.

It is entertaining as hell. Is it perfect? No. The dialog stutters a bit and lost me a few times in the beginning, and there were some pacing issues mid-book. But it is a hell of a lot of fun, and I am just being picky.

If you want to feel completely metal check this out. 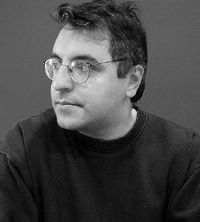 Nick Mamatas is the author of the Lovecraftian Beat road novel Move Under Ground, which was nominated for both the Bram Stoker and International Horror Guild awards, the Civil War ghost story Northern Gothic, also a Stoker nominee, the suburban nightmare novel Under My Roof, and over thirty short stories and hundreds of articles (some of which were collected in 3000 Miles Per Hour in Every Direction at Once). His work has appeared in Razor, Village Voice, Spex, Clamor, In These Times, Polyphony, several Disinformation and Ben Bella Books anthologies, and the books Corpse Blossoms, Poe’s Lighthouse, Before & After: Stories from New York, and Short and Sweet.