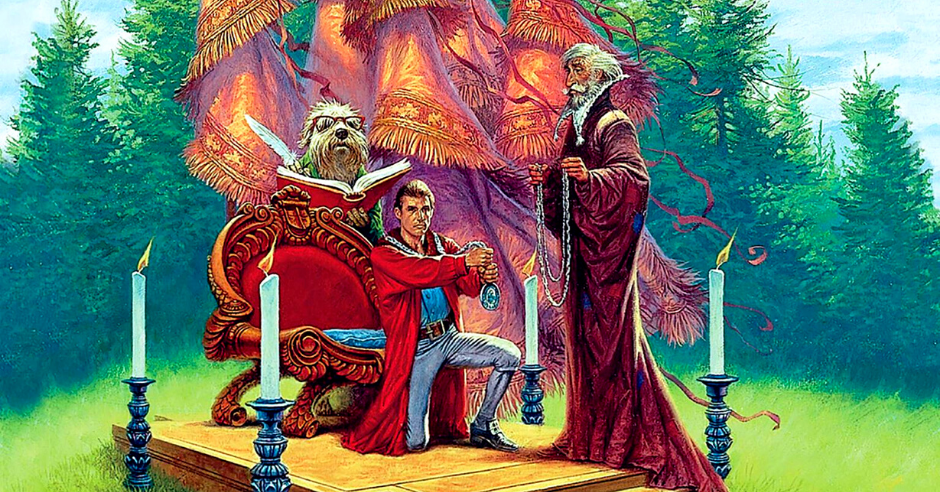 While the 1980s has always been described as a decade of decadence and corporate greed. One of the best parts of the 1980s was the rise of some of our favorite fantasy writers. It is the decade of Eddings, Brooks, and Wolfe.

But aside from these big household names, there are tons of captivating stories that you might not have heard of.

Check out these titles!

The Curse of Sagamore by Kara Dalkey

Everyone in the kingdom is battling over control of the throne except young Prince Abderian, who becomes trapped in a web of political intrigue involving ghosts and goddesses, demons and dragons, heroes and heretics, and a powerful but senile wizard.

The Mask of the Wizard by Catherine Cooke

When Kyellan led his troops north to guard the royal prince on his pilgrimage, he didn’t expect to encounter an intriguing young priestess and a dangerous wizard invasion. Swords and sorcery lead to romance in this epic fantasy, in a new ebook edition with corrections by the author. Book One in a trilogy that includes “Veil of Shadow” and “The Hidden Temple.”

The Winged Assassin by Catherine Cooke

Haunted by gods and demons, Arris flees from his destiny into a life of slavery and danger. Then he faces a mission to kill his childhood best friend—if he doesn’t fall in love with him first. The first in a trilogy set in an imaginary ancient Middle East, the story continues in Realm of the Gods and The Crimson Goddess.

The Greenbriar Queen by Sheila Gilluly

The watchmen must guard Princess Ariadne, the future queen of Ilyria, from the wizard Fallen, who needs some of her blood to free the evil Dark Lord from exile.

The Sleeping Dragon by Joel Rosenberg

Seven college students meet for another night of role-playing games, where they will be cast as wizard, warrior, cleric, or thief. However, their conniving gamemaster has something entirely new planned for them. The seven gamers are cast into an alternate world of magic, fire-breathing dragons – and a quasi-medieval culture with slavery. The only way back to Earth is through a dragon-guarded Gate Between Worlds, about which little is known.
The five men and two women face tough challenges – simple survival in a harsh environment as well as finding the mysterious Gate to bring them home. Publishers Weekly praised this series for its “energy, wit, and a strong moral sensibility.”

Terry Pratchett published books in the 70s, but it was his Discworld novels, starting with The Colour of Magic in 1983, that brought him his greatest success. In the 90s he was the UK’s best-selling author.

Magician is based on a role-playing game. Raymond E. Feist and his friends created the world of Midkemia as an alternative to Dungeons & Dragons and founded Midkemia Press. Feist eventually wrote a story set 500 years earlier than the RPG, which became the Riftwar Saga.

The River of the Dancing Gods by Jack L. Chalker

Something strange happens to Joe and Marge on the way to El Paso. They run into Throckmorton P. Ruddygore, a strange wizard who informs them that they are going to die in nineteen minutes and eighteen seconds.
But they also have a choice. They can abandon the current world by taking a ferryboat across the Sea of Dreams to a new life in a new world, full of magic, fairies and wonder.
But along with all its wonders, the new world is also the site of an ancient battle still being fought between the forces of Evil and Good, and the forces of Hell threaten to unleash perpetual darkness.
Joe and Marge not only need their wits to survive in this unpredictable and dangerous world, but must somehow help prevent the oncoming Armageddon.

A classic series for a new generation of fantasy adventure fans, Thieves’ World® paved the way for the shared-world anthology tradition with epic worldbuilding, unforgettable characters, and nonstop action thanks to the legendary authors who contribute to it.
The series’s groundbreaking debut features stories by John Brunner, Lynn Abbey, Poul Anderson, Andrew J. Offutt, Robert Lynn Asprin, Joe Haldeman, Christine DeWees, and Marion Zimmer Bradley, who populate the lawless city of Sanctuary with orphans and wizards, fortune tellers and emperors, merchants and madams, spies, assassins, and, of course, thieves.

Landover was a genuine magic kingdom, with fairy folk and wizardry, just as the advertisement has promised. But after he purchased it, Ben Holiday learned that there were a few details the ad had failed to mention.
The kingdom was in ruin. The Barons refused to recognize a king, and the peasants were without hope. A dragon was laying waste the countryside, while an evil witch plotted to destroy everything.
Ben’s only followers were the incompetent Court Magician; Abernathy, the talking dog who served as Court Scribe; and the lovely Willow—but she had a habit of putting down roots in the moonlight and turning into a tree. The Paladin, legendary champion of the Kings of Landover, seemed to be only a myth and an empty suit of armor.
To put the final touch on the whole affair, Ben soon learned that the Iron Mark, terrible lord of the demons, had challenged all prospective Kings of Landover to duel to the death—a duel which no human could hope to win.
The task of proving his right to be King seemed hopeless. But Ben Holiday was stubborn. . . .

A Malady of Magicks by Craig Shaw Gardener

“Guxx Unfufadoo is my name. And killing wizards is my game!”Thus spoke the dreaded rhyming demon, come from the Netherhells, to munch a bunch of the great Ebenezum.Only it didn’t quite work out that way. Ebenezum lived, cursed by Guxx with a mighty curse that he should henceforth be allergic to magic.So Ebenezum and his hapless apprentice Wuntvor must journey to the City of Forbidden Delights to seek a cure. They find the road fraught with peril and dark magic, from tap-dancing dragons to enchanted chickens, slobbering trolls, winsome witches and sinister shrubbery.It’s up to Wunt to see them through, to utter the sounds of power and speak the spells that will insure their health, wealth and continued life. It only he could remember the words…

Tour Feature – Hag of the Hills by J.T.T. Ryder